What is an Electric Locomotive?

An “Electric Locomotive” is a railway vehicle that can move along rails and push or pull a train attached to it using electric power drawn from an external source, usually from overhead cables or a third rail.

Electric Locomotives do not have a conventional “engine” in them as we have seen in a diesel locomotive, but use the electricity collected from the outside source to power traction motors which turn the wheels.

Electric Locomotives are of three types: Those which can work on

Electric Locomotives, though high on electrical engineering, work on the single principle of drawing current from external sources and then after sufficiently “modifying” it, feed it to the traction motors.

The process of “modifying” the raw current drawn from outside into “usage” power includes a complicated process of conversion, reconversion, smoothening and transformation of the current to varying values of frequency, Voltage, Current etc.

This involves a bank of many components like transformers, rectifiers, inverters, capacitors, thyristors, compressors and other such paraphernalia, housed within the locomotive body or the “shell”, and there is no central “Engine” or prime mover.

All this has to be done for optimum performance of the traction motors under different conditions and loads. Bi-Current locomotives work according to the same principles, only they have more equipment packed inside them to enable them to work under both type of currents.
Each one the Pantographs are used to collect a specific type of current only.

The electric locomotive draws power from the over head equipment (OHE) with the help of Pantograph and converts this electrical energy to mechanical energy, in controlled manner, through Traction Motors which drive the axles.
To enable the locomotive to perform this task, it is equipped with suitable equipment, which enable loco pilot to control the speed of the train as per requirement by controlling the applied voltage to traction motors.
In conventional locomotives, 25KV, Single phase, AC supply is collected by a roof-mounted pantograph from the OHE and is stepped down by a transformer inside the locomotive.
This supply is then converted to DC supply by a full wave silicon rectifier and associated smoothing filter before being fed to the traction motors.
Torque / speed control is achieved by variation of the AC input voltage to the rectifier through an on-load tap changing arrangement on the primary winding of the loco transformer.
The equipment on electric locomotive, depending up on where it is located, can be classified in three different categories viz.
Both the roof and the under frame equipment are subjected to lot of dust and atmospheric pollution and are therefore designed to withstand these severe working conditions. 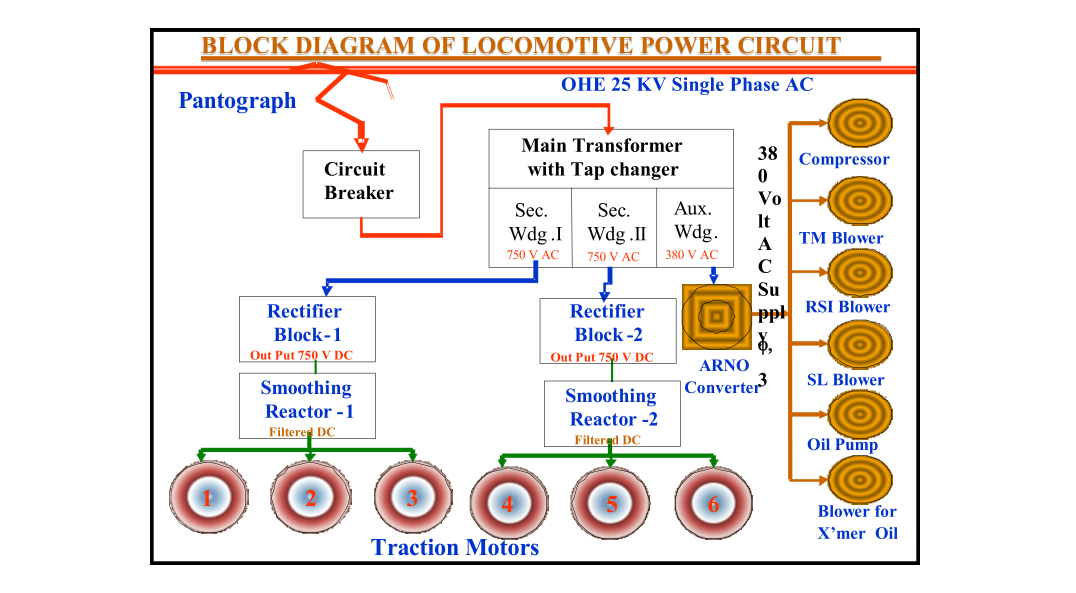 Pantograph
The High Tension current (25 kV) for feeding locomotive is taken from contact wire by means of current collecting device called pantograph. Each loco is provided with two similar pantographs on the roof. As a practice, the rear pantograph is generally used.

When the Circuit breaker closed manually through remote control, OHE supply collected by pantograph is made available to the main transformer in side the locomotive.
It opens automatically in case of over current or earth fault in the loco under the action of protective devices.
Now, air blast circuit breakers are being replaced by vacuum circuit breaker (VCB) due to its superior qualities and less maintenance.

Since the traction motors are DC motors, alternating current supplied by secondary windings of main transformer is converted in to direct current by means of two silicon rectifiers (RSI), one each feeding to set of three traction motors.

Traction Motors
In general, the locomotive is provided with six DC series type traction motors(TMs).
These TMs are mounted in two under frame bogies coupled with wheels through pinion-gear arrangement.

Smoothing reactor
As output of rectifier is of undulating (Pulsating) nature, it is passed through an inductive choke called smoothing reactor (SL) to reduce the undulation of the current and to make current smoother.

Loco is provided with following brakes:

Nowadays DC motors are largely replaced by Three Phase Induction Motors due to their advantages over DC motors. Some of them are pointed below.

25 kV overhead AC supply is stepped down with the main transformer in the locomotive and fed to a front end (line) twin 4-quadrant line converter where AC is converted to DC through Pulse Width Modulation( PWM) thus achieve unity power factor.
This supply is linked with an input side converter through DC link which is a reservoir of energy.
Drive converter (VVVF Converter) converts DC supply into 3 phase which is then fed to 3 phase traction motors.
Gate turn off (GTO) thyristors are used in converter/inverter.
The output of Drive converter (inverter) is Variable Voltage Variable Frequency (VVVF) supply which helps in controlling the starting and running torques of three-phase traction motors to suite traffic requirements.

Electric locomotives have this major drawback of being totally dependent on the power which has to be supplied for it to run.
Any power outage, short circuit or breaking of Overhead Equipment (OHE) will cause trains to come to a standstill. Hence, even on fully electrified routes, diesel locomotives are kept on standby always. And on partly electrified routes, trains are run on diesel under the wire because it is more efficient than switching locomotives. How to Get Help with Engineering Online Free: Web Resources to Hire Assignment Helper