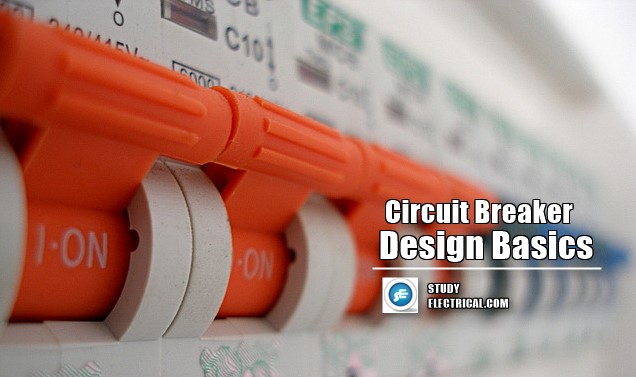 Circuit breakers are electrical switchgear which are constructed from the following five major components.

The functions and features of each component are explained with pictures.

Contacts are of two types depending on the interrupting rating.

Some circuit breakers use a straight-through contact arrangement, so-called because the current flowing in one contact arm continues in a straight line through the other contact arm.

Blow-apart contact design is commonly used by circuit breakers with higher interrupting ratings. With this design, the two contact arms are positioned parallel to each other.

Under normal conditions, the magnetic fields are not strong enough to force the contacts apart.

When a fault develops, current increases rapidly causing the strength of the magnetic fields surrounding the contacts to increase as well. The increased strength of the opposing magnetic fields helps to open the contacts faster by forcing them apart.
By reducing the time required to open circuit breaker contacts when a fault occurs, the blow-apart contact design reduces the damaging heat felt by the circuit protected by the circuit breaker.

This assembly is made up of several “U” shaped steel plates that surround the contacts. As the arc developes, it is drawn into the arc chute where it is divided into smaller arcs, which are extinguished faster.

Minimizing the arc is important for two reasons.
If the arc isn’t extinguished quickly the pressure from the ionized gases can cause the molded case to rupture.

Arcing phenomenon and methods of arc extinction were discussed in previous articles.

A circuit breaker must provide a manual means for energizing and de-energizing a circuit and must be capable of being reset after a fault condition has been cleared.

These capabilities are typically provided through the use of an operating handle.

Molded case circuit breakers (MCCBs) are trip free, meaning that they cannot be prevented from tripping by holding or blocking the operating handle in the “ON” position.
There are three positions of the operating handle: “ON” (contacts closed), “OFF” (contacts open), and “TRIPPED” (mechanism in tripped position, contacts open). The circuit breaker is reset after a trip by moving the handle to the “OFF” position and then to the “ON” position.

The operating handle is connected to the moveable contact arm through an operating mechanism.

In the following illustration, the operating handle is moved from the “OFF” to the “ON” position (Figure 1). In this process, a spring begins to apply tension to the mechanism.

When the handle is directly over the center, the tension in the spring is strong enough to snap the contacts closed. This means that the speed of the contact closing is independent of how fast the handle is operated.

The contacts are opened by moving the operating handle from the “ON” to the “OFF” position (Figure 2). In this process, spring begins to apply tension to the mechanism.

When the handle is directly over the center, the tension in the spring is strong enough to snap the contacts open. Therefore, contact opening speed is also independent of how fast the handle is operated. Why Electric Motors are Rated in kW and not in kVA?