When the contacts of the oil circuit breaker are opened under oil and an arc is struck between them. The heat of the arc evaporates the surrounding oil and dissociates it into a substantial volume of gaseous hydrogen at high pressure. 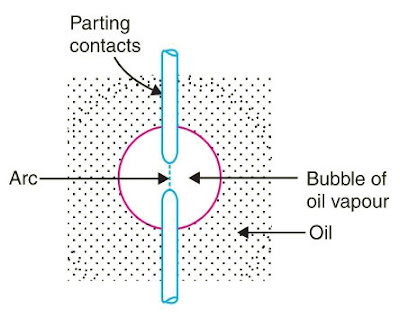 The hydrogen gas occupies a volume about one thousand times that of the oil decomposed. The oil is, therefore, pushed away from the arc and an expanding hydrogen gas bubble surrounds the arc region and adjacent portions of the contacts (See Figure).

The result is that arc is extinguished and circuit current interrupted.

Advantages and Disadvantages of Oil CB

The oil circuit breakers find extensive use in the power system. These can be classified into the following types :

In Bulk oil CB oil has to serve two purposes.

In Low Oil circuit breakers, oil is used only for arc extinction; the current-conducting parts are insulated by air or porcelain or organic insulating material.

In case of plain-break oil circuit breaker discussed above, there is very little artificial control over the arc. Therefore, comparatively long arc length is essential in order that turbulence in the oil caused by the gas may assist in quenching it.

However, it is necessary and desirable that final arc extinction should occur while the contact gap is still short. For this purpose, some arc control is incorporated and the breakers are then called arc control circuit breakers.

There are two types of such breakers, namely :

In the bulk oil circuit breakers discussed so far, the oil has to perform two functions. Firstly, it acts as an arc quenching medium and secondly, it insulates the live parts from the earth. It has been found that only a small percentage of oil is actually used for arc extinction while the major part is utilized for insulation purposes.

For this reason, the quantity of oil in bulk oil circuit breakers reaches a very high figure as the system voltage increases. This not only increases the expenses, tank size and weight of the breaker but it also increases the fire risk and maintenance problems.