In this article, you will learn three principle methods of magnetizing a steel bar.

But if two south poles are brought near each other, they repel. The same happens in the case of two north poles. This means that (i) like poles repel each other and (ii) unlike poles attract each other.

From the above, it is clear that a magnet attracts pieces of iron or steel but repels only magnets. Therefore repulsion is a sure test of magnetism.

Now let’s understand how a can we magnetize a steel bar.

There are three principal methods of magnetizing a steel bar as given below:

This method can be further divided as

In the single touch method, the steel bar to be magnetized is rubbed with either of the poles of a magnet, keeping the other pole away from it.

Rubbing is only done in one direction as shown. The process should be repeated many times for the magnetization of the bar.

In this method, the steel bar to he magnetized is placed over the two opposite pole ends of a magnet and the rubbing magnets are placed together over the center of the bar with a small wooden piece in between, as shown.

They are never lifted off the surface of the steel bar, but rubbed again and again from end to end, and finally ending at the center where the rubbing was started.

Here the two different poles of rubbing magnets are placed as in the previous case. They are then separated along the surface of the steel bar to the opposite ends.

The rubbing magnets are then lifted off the surface of the steel bar and placed back in the center of the bar. This whole process is repeated again and again as shown.

The steel bar thus magnetized becomes a permanent magnet but the degree of magnetization is very low.

The bar to be magnetized is wound with insulated copper wire and then a strong electric current (dc) from a battery is passed through the wire for some time. The steel bar then becomes highly magnetized.

If the bar is of soft iron, the magnetism remains as long as the current continues but almost completely disappears as soon as the current ceases. The magnet made by such an arrangement is called an electromagnet and is generally used in laboratories.

This is a commercial method of making permanent magnets. In this method, a pole charger is used which has a coil of many turns and an iron core inside it as shown below. The direct current supply is fed to the coil through a push-button switch.

The following are the advantages of the induction method of magnetization.

How to Make a Wise Choice of Electronics for the Household? 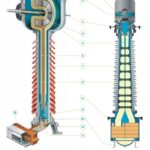