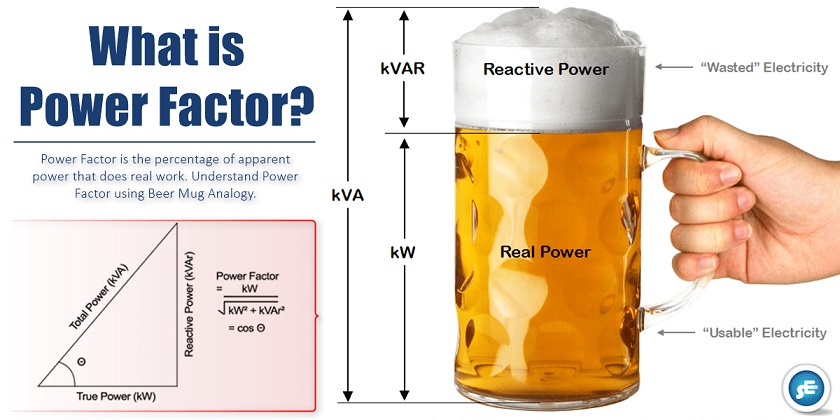 Simply stated, the Power Factor is the percentage of Apparent Power that does real work.

Let’s say you are at the park and it is a really hot day. You order up a mug of beer. 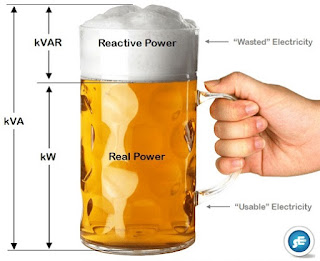 So, we understood some basic terms from the beer mug analogy.
Now we are ready to learn about power factor:
Power Factor (Cos Φ) is the ratio of Working Power (True Power) to Apparent Power.
PF = KW/KVA
Looking at our beer mug analogy above, the power factor would be the ratio of beer (KW) to beer plus foam (KVA).
PF = KW / (KW + KVAR)
Cos Φ = Beer / (Beer +Foam)
Thus, for a given KVA:

So, In order to have an “efficient” system, we want the power factor to be as close to 1.0 as possible.

A power factor of one or “unity power factor” is the goal of any electric utility company.

It is because if the power factor is less than one, they have to supply more current to the user for a given amount of power use. In so doing, they incur more line losses.

Great, now we understood what power factor is.

Recently I found that the power factor in my factory is very low. I was thinking what wrong I did to cause this?

Since power factor is defined as the ratio of KW to KVA, we see that low power factor results when KW is small in relation to KVA.

Remembering our beer mug analogy, this would occur when KVAR (foam) is large.

What causes a large KVAR in a system? The answer is Inductive Loads.

Inductive loads (which are sources of Reactive Power) include:

These inductive loads constitute a major portion of the power consumed in industrial complexes.

This increase in reactive and apparent power results in a larger angle θ (measured between KW and KVA). Recall that, as θ increases, cosine θ (or power factor) decreases.

Why Should I Improve My Power Factor?

Okay. So I’ve got inductive loads at my facility that is causing my power factor to be low. Why should I want to improve it?

Improving the power factor can lower the utility bill by

By adding capacitors (KVAR generators) to the system, the power factor is improved and the KW capacity of the system is increased.

Uncorrected power factor causes power system losses in your distribution system. By improving your power factor, these losses can be reduced.

With the current rise in the cost of energy, increased facility efficiency is very desirable. And with lower system losses, you are also able to add additional load to your system.

As mentioned above, the uncorrected power factor causes power system losses in your distribution system.

So, by raising your power factor, you will minimize these voltage drops along with feeder cables and avoid related problems. Your motors will run cooler and be more efficient, with a slight increase in capacity and starting torque.

How Do I Correct (Improve) My Power Factor?

How do I go about improving (i.e., increasing) my power factor?

We have seen that sources of Reactive Power (inductive loads) decrease power factor:

Thus, it comes as no surprise that one way to increase the PF is to add capacitors to the system. This and other ways of increasing power factor are listed below:

Here is how it works, Inductance and capacitance react 180 degrees to each other. Capacitors store KVAR and release energy opposing the reactive energy caused by the inductor.

The presence of both a capacitor and inductor in the same circuit results in the continuous alternating transfer of energy between the two.

Thus, when the circuit is balanced, all the energy released by the inductor is absorbed by the capacitor.

We already talked about the fact that low PF is caused by the presence of induction motors.

3. Avoiding operation of equipment above its rated voltage.

Another method of improving the PF is to avoid operating equipment above their rated voltage.

4. Replacing standard motors as they burn out with energy-efficient motors.

Even with energy-efficient motors, power factor is significantly affected by variations in load.

A motor must be operated near its rated load in order to realize the benefits of a high power factor design.