The parallel arrangement of DC series generators are described below:

The two DC series motors are disconnected from the supply mains and are connected in parallel to the resistors.

During braking the motors continue to run due to the kinetic energy of train and act as self-excited dc series generators generating emfs.

The kinetic energy is converted into heat and dissipated in the resistors. This is how DC series generators work while operating in parallel.

For satisfactory parallel operation of dc series generators, it is necessary to connect the armatures of the two machines through a heavy copper bar, called the equalizing bar.  It is explained below :

Let two DC machines (I and II) of resistance R (the armature and field resistance), induced EMFs E1 and E2 operate in parallel, as shown in the first figure. 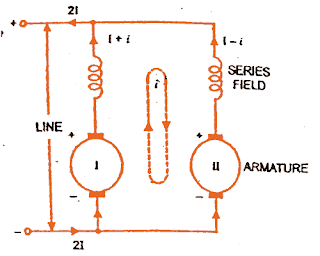 When the induced EMFs E1 and E2 are equal they will share the equal load.

There is a problem when induced EMFs are different in the two machines. When one of the induced emf becomes greater than another induced emf a circulating current will flow.

If E1 becomes slightly greater than E2, then a current i will circulate in the clockwise direction, as shown by dotted lines in the first figure. The magnitude of the circulating current i will be (E1-E2) /R.

Now total current supplied by machine I will be (I + i) and of machine II (I – i). So the series field current of the machine I increase, also characteristic of a DC series generator is a rising characteristic.

Thus the effect is cumulative and if there were no fuse or automatic switch in the circuit, the current it machine II will be reversed. This would reverse the direction of induced emf E2 and resultant emf in the circuit would be [E – (- E2)] i.e. (E1 + E2) and circulating current (E1+ E2)/2R.

Thus the two EMFs will then act in series around a circuit of very low resistance and conditions are virtually those of a short-circuit on the two machines resulting in damage of the machines. We have to avoid this short circuit problem for the parallel operation of DC series generators.

Here comes the use of equalizer bars in the parallel operation of DC series generators. 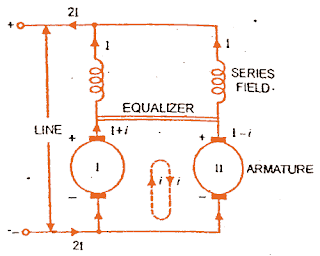 The possibility of reversal of either machine can be prevented by preventing the flow of circulating current produced due to inequalities of induced EMFs of the machines through the series field winding.

This aim can be achieved by connecting a heavy copper bar of negligible resistance across the two machines as shown in the figure.

Now the circulating current does not affect the field winding, but it gets confined to the armature and the equalizing bars. Now if the armature current increases, the terminal voltage drop occurs and the original condition is restored.