In a DC power plant, power is usually supplied from several generators of small ratings connected in parallel instead of from one large generator.

This is due to the following reasons:

If a single large generator is used in the power plant, then in case of its breakdown, the whole plant will be shut down.

However, if power is supplied from a number of small units operating in parallel, then in case of failure of one unit, the continuity of supply can be maintained by other healthy units.

Generators run most efficiently when loaded to their rated capacity. Electric power costs less per kWh when the generator producing it is efficiently loaded.

Therefore, when load demand on power plant decreases, one or more generators can be shut down and the remaining units can be efficiently loaded. 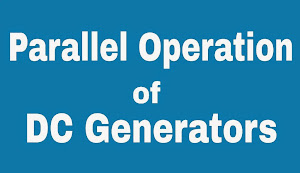 Generators generally require routine-maintenance and repair. Therefore, if generators are operated in parallel, the routine or emergency operations can be performed by isolating the affected generator while the load is being supplied by other units. This leads to both safety and economy.

In the modern world of increasing population, the use of electricity is continuously increasing. When added capacity is required, the new unit can be simply paralleled with the old units.

5. Non-availability of a single large unit

In many situations, a single unit of desired large capacity may not be available. In that case, a number of smaller units can be operated in parallel to meet the load requirement. Generally, a single large unit is more expensive.