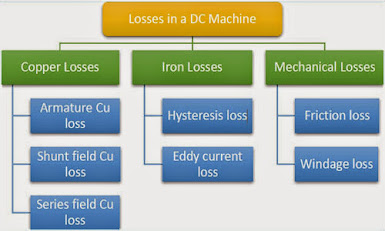 These losses occur due to currents in the various windings of the machine.

These losses occur in the armature of a d.c. machine and are due to the rotation of armature in the magnetic field of the poles. They are of two types viz.,

Hysteresis loss occurs in the armature of the d.c. machine since any given part of the armature is subjected to magnetic field reversals as it passes under successive poles.

Figure shows an armature rotating in a two-pole machine. Consider a small piece ab of the armature. When the piece ab is under N-pole, the magnetic lines pass from a to b.

Half a revolution later, the same piece of iron is under S-pole and magnetic lines pass from b to a so that magnetism in the iron is reversed.

In order to reverse continuously the molecular magnets in the armature core, some amount of power has to be spent which is called hysteresis loss. It is given by Steinmetz formula. This formula is

In order to reduce this loss in a d.c. machine, armature core is made of such materials which have a low value of Steinmetz hysteresis co-efficient e.g.,silicon steel.

The eddy current loss appears as heat which raises the temperature of the machine and lowers its efficiency.

If a continuous solid iron core is used, the resistance to eddy current path will be small due to large cross-sectional area of the core. Consequently, the magnitude of eddy current and hence eddy current loss will be large.

The magnitude of eddy current can be reduced by making core resistance as high as practical.

The core resistance can be greatly increased by constructing the core of thin, round iron sheets called laminations. The laminations are insulated from each other with a coating of varnish. The insulating coating has a high resistance, so very little current flows from one lamination to the other.

These losses are due to friction and windage.

These losses depend upon the speed of the machine. But for a given speed, they are practically constant.