The most common ammeters and voltmeters for laboratory or switch-board use at power frequencies are the moving iron instruments.

These instruments can be constructed to measure current and voltage to the accuracy needed in most engineering works and still be cheap as compared with any other type of AC instrument of the same accuracy and ruggedness.

A plate or vane of soft iron or of high permeability steel forms the moving element of the system. This iron vane is so situated that it can move in a magnetic field produced by a stationary coil.

The coil is excited by the current or voltage under measurement.

When the coil is excited, it becomes an electromagnet and the iron vane moves in such a way so as to increase the flux of the electromagnet. This is because the vane tries to occupy a position of minimum reluctance.

Thus the force (or torque) produced is always in such a direction as to increase the inductance of the coil (As induct-ance increases as reluctance decreases).

The current to be measured, in general, is passed through a coil of wire in the moving iron instruments. In the case of voltage measurement, the current which is proportional to the voltage is measured.

The number of turns of the coil depends upon the current to be passed through it. For the operation of the instrument, a certain number of ampere-turns is required.

These ampere-turns can be produced by the product of a few turns and large current or reverse.

The attraction type of moving iron instrument depends on the attraction of an iron vane into a coil carrying the current to be measured.

A soft iron vane IV is attached to the moving system. When the current to be measured is passed through the coil C, a magnetic field is produced. This field attracts the eccentrically mounted vane on the spindle towards it. The spindle is supported at the two ends on a pair of jewel bearings. Thus, the pointer PR, which is attached to the spindle S of the moving system is deflected. The pointer moves over a calibrated scale.

The control torque is provided by two hairsprings S1 and S2 in the same way as for a PMMC instrument, but in such instruments, springs are not used to carry any current.

Gravity control can also be used for vertically mounted panel type MI meters. The damping torque is provided by the movement of a thin vane V in a closed sector-shaped box B, or simply by a vane attached to the moving system.

If the current in the fixed coil is reversed, the field produced by it also reverses. So the polarity induced on the vane reverses. Thus whatever be the direction of the current in the coil the vane is always be magnetized in such a way that it is attracted to the coil. Hence such an instrument can be used for both direct currents as well as alternating current.

A sectional view of the actual instrument is shown in the figure. When the current to be measured is passed through the coil or solenoid, a magnetic field is produced, which attracts the eccentrically mounted disc inwards, thereby deflecting the pointer, which moves over a calibrated scale.

In the repulsion type, there are two vanes inside the coil. One is fixed and the other is movable. These are similarly magnetized when the current flows through the coil and there is a force of repulsion between the two vanes resulting in the movement of the moving vane.

In this type, the vanes are radial strips of iron. The strips are placed within the coil as shown in the figure. As current flows through the coil, the generated magnetic field induces identical polarities on both the fixed and moving vane. Thus, even when the current through the coil is alternating (for AC measurement), there is always a repulsion force acting between the like poles of fixed and moving vane. Hence deflection of the pointer is always in the same direction irrespective of the polarity of the current in the coil.

In these types of instruments, the fixed and moving vanes are sections of coaxial cylinders as shown in the figure.

Moving iron instruments have their deflection is proportional to the square of the current flowing through the coil. These instruments are thus said to follow a square-law response and have non-uniform scale marking.

The video below shows the components inside a repulsion type moving iron ammeter.

To deduce the expression for the torque of a moving iron instrument, energy relation can be considered for a small increment in current supplied to the instrument. This results in a small deflection dθ and some mechanical work will be done. Let Td be the deflecting torque.

Due to the change in inductance, there will be a change in the energy stored in the magnetic field.

Let I be the initial current, L be the instrument inductance and θ is the deflection. If the current increases by dl then it causes the change in deflection dθ and the inductance by dL.

In order to involve the increment dI in the current, the applied voltage must be increased by:

[substitute the value of edt from above equation]

As dI and dL are very small, neglecting the second and higher order terms in small quantities, this becomes

From the principle of conservation of energy,

where Td is in newton-meter, I is in ampere, L is in henry and θ is in radians.

The moving system is provided with control springs and in turn, the deflecting torque Td is balanced by the controlling torque

where k is the control spring constant (N-m/rad) and θ is the deflection in radians.

Hence, the deflection is proportional to the square of the RMS value of the operating current. The deflection torque is, therefore, unidirectional whatever may be the polarity of the current.

The important advantages of moving iron instruments are

The following are the disadvantages of moving iron instruments 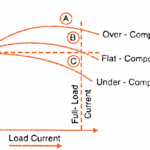