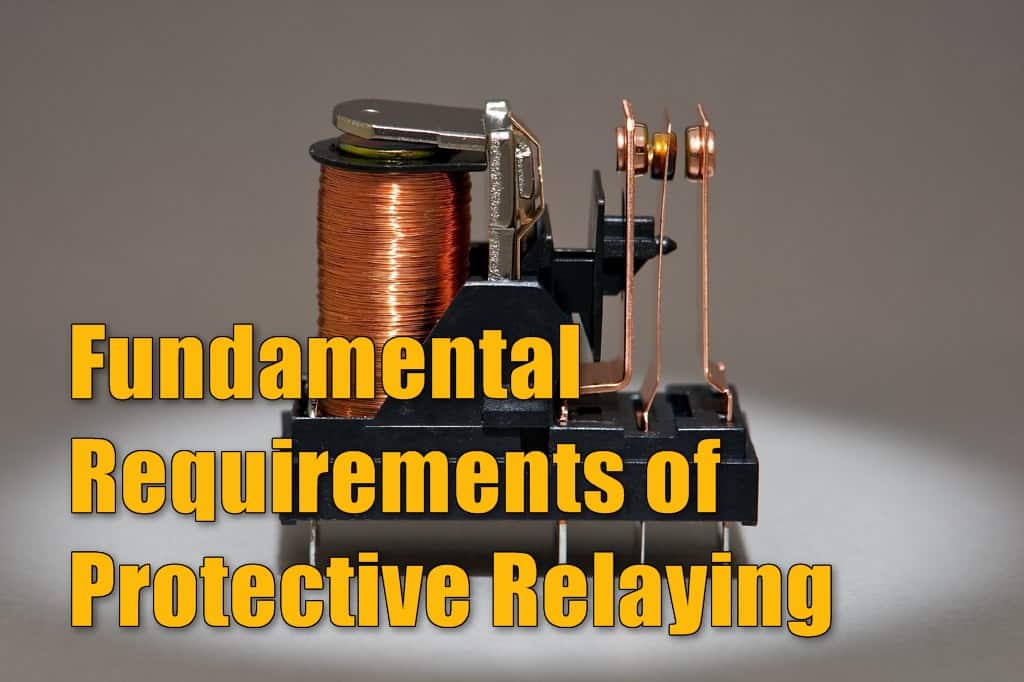 The principal function of protective relaying is to cause the prompt removal from service of any element of the power system when it starts to operate in an abnormal manner or interfere with the effective operation of the rest of the system.

In order that protective relay system may perform this function satisfactorily, it should have the following qualities :

It is the ability of the protective system to select correctly that part of the system in trouble and disconnect the faulty part without disturbing the rest of the system.

This can be illustrated by referring to the single line diagram of a portion of a typical power system shown in the figure below. It may be seen that circuit breakers are located in the connections to each power system elements in order to make it possible to disconnect only the faulty section.

If a fault occurs at bus-bars on the last zone, then only breakers nearest to the fault viz. 10, 11, 12 and 13 should open. In fact, the opening of any other breaker to clear the fault will lead to a greater part of the system being disconnected.

In order to provide selectivity to the system, it is a usual practice to divide the entire system into several protection zones. When a fault occurs in a given zone, then only the circuit breakers within that zone will be opened. This will isolate only the faulty circuit or apparatus, leaving the healthy circuits intact.

The system can be divided into the following protection zones :

It may be seen in the above figure that there is a certain amount of overlap between the adjacent protection zones. For a failure within the region where two adjacent zones overlap, more breakers will be opened than the minimum necessary to disconnect the faulty section.

But if there were no overlap, a failure in the region between zones would not lie in either region and, therefore, no breaker would be opened. For this reason, a certain amount of overlap is provided between the adjacent zones.

The relay system should disconnect the faulty section as fast as possible for the following reasons :
The ultimate goal of protective relaying is to disconnect a faulty system element as quickly as possible. Sensitivity and selectivity are essential to assuring that the proper circuit breakers will be tripped, but speed is the ‘pay-off’.

It is the ability of the relay system to operate with a low value of actuating quantity.

The sensitivity of a relay is a function of the volt-amperes input to the coil of the relay necessary to cause its operation.

Thus, a 1 VA relay is more sensitive than a 3 VA relay. It is desirable that the relay system should be sensitive so that it operates with low values of volt-ampere input.

It is the ability of the relay system to operate under pre-determined conditions. Without reliability, the protection would be rendered largely ineffective and could even become a liability.

That protective-relaying equipment must be reliable is a basic requirement. When protective relaying fails to function properly, the allied mitigation features are largely ineffective.

Therefore, it is essential that protective-relaying equipment be inherently reliable, and that its application, installation, and maintenance be such as to assure that its maximum capabilities will be realized.

The relaying system should be simple so that it can be easily maintained. Reliability is closely related to simplicity. The simpler the protection scheme, the greater will be its reliability.

The most important factor in the choice of a particular protection scheme is the economic aspect. Sometimes it is economically unjustified to use an ideal scheme of protection and a compromise method has to be adopted.

However, when the apparatus to be protected is of utmost importance (e.g. generator, main transmission line etc.), economic considerations are often subordinated to reliability.