What is a Static Relay?

Solid State Relay (Static Relay) is an electrical relay in which the response is developed by electronic/magnetic/optical or other components, without mechanical motion of components.

A solid state relay is composed of both static and electromechanical units in which the response is accomplished by the static units. Therefore solid state relays are also called as static relays.

The figure shows the essential components in a static relay. The output of Current Transformers or Potential Transformers or transducers is rectified in the rectifier.
The rectified output is fed to the measuring unit. The measuring unit comprises comparators, level detectors, ﬁlters, logic circuits. The output is initiated when the input reaches the threshold value.

The output of the measuring unit is ampliﬁed by Ampliﬁer. The ampliﬁed output is given to the output unit which energizes the trip coil only when the relay operates.

A simpliﬁed block diagram of a single input static relay is given in the above figure. In individual relays, there is a wide variation. The quantities: voltage, current. etc. is rectified and measured. When the quantity to be measured reaches certain well-deﬁned value, the output device is triggered. Thereby current ﬂows in the trip circuit of the circuit-breaker.

The figure below gives a block diagram of a microprocessor-based digital, programmable static relay.

Static relays can be arranged to respond to electrical inputs. The other forms of inputs such as heat, light, magnetic field, traveling waves, etc. can be suitably converted into equivalent analog or digital signals and then fed to the static relay.

A programmable protection and control system has a microprocessor or microcomputer in its circuit.

With the help of the logic circuits and the microprocessor, the integrated protection and control system can perform several functions of data acquisition, data processing, data transmission, protection, and control. Earlier, for each of these functions, separate electromechanical or static units were used along with complex wiring. 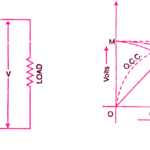